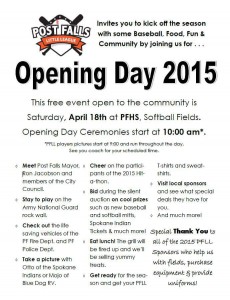 Ceremonies begin at 10 am.  Blue Dog’s mascot will be throwing out the first pitch. We are excited to see the 2015 little league season start!

Baseball has been a huge part of American history. Did you know little league was officially formed by Carl Stotz in 1939? The first three teams were the Lycoming Dairy, Lundy Lumber and Jumbo Prestel. There were eight volunteers on the board. At that time the sponsorship fee was 30.00. That paid for equipment and uniforms for 30 players. On June 6 1939 the first game was played. Lundy Lumber defeated Lycoming Dairy 23-8 and Lycoming Dairy came back to win the season’s first half title.

In the Following years Little League became the world’s largest organized youth sports program with nearly 200,000 teams in the U.S. and more than 80 countries.

This is a lot like Blue Dog RV….. Starting from a basic idea and growing to serve the needs of people. Blue Dog is Proud to be a sponsor of this year’s Little League.

HOPE TO SEE YOU AT THE GAMES!