Today, owning an RV is a luxury, especially if you own a brand new Class A Motorhome or anything like that. While modern day RVs typically provide comfort and a place to rest with amenities like fireplaces, large kitchen, full bathrooms, and even king size beds, that wasn’t always the case. The RV industry has come a long way since it began back in the early 1900s. Check out the history of RVs and how they have evolved into a machine that has risen to popularity throughout most of the United States. 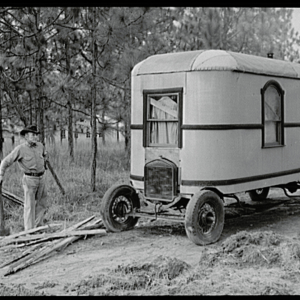 When was the First RV Built?

In the early 1900s, the first versions of “recreational vehicles” began to appear and were all custom built. By “recreational vehicle,” we mean a car with a simple wooden trailer attached to the back of it. Not really what we think of when we hear the word “RV” right? Well, we had to start somewhere! Not long after the first “RVs” came out, automobile lovers began to expand on these “homes on wheels” ideas and improve them as well. One of the very first, most popular RVs was the “Pierce Arrow Touring Landau.”

What is the Oldest Motorhome?

Shortly after RVs began to appear, the first “motorhome” arrived on the scene. In 1910, the very first “motorhome,” made from a 3 ton Packard truck, made its debut. The vehicle was 28 feet long, 6.5 feet wide, and it could sleep 11 people, which was impressive considering how early it was made! It also boasted an ice box, a toilet, and a “salon,” making it the very first bonafide “motorhome.” 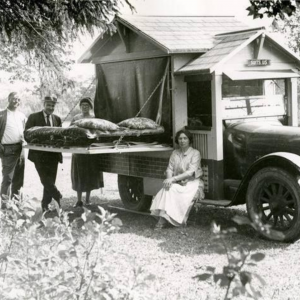 When did RVs Become Popular?

As camping became more popular throughout the next decade (1911-1920), so did RVs. More and more people began to adapt their cars and trucks to their lifestyle, mostly using wood and tents. Considering the people coming up with these designs largely were not mechanics or engineers, these advancements were ingenious and just kept getting better. Most of these automobiles had refrigerators, kitchenettes, showers, baths, and other typical features we’d expect to see on modern RVs. Some were even equipped with telegraphs and electric lights!

One of the most impressive vehicles of this time was “The Gypsy Van,” which boasted 2 stories, weighed 8 ton, and had the interior like that of an English manor house. Then, in 1917, the first Fifth Wheel camping trailer was invented, which really changed the RV game. Throughout the 1920’s, custom RVs just kept coming and were often built on the most popular car at the time, which was none other than the Ford model. This became known as the “Ford House Car.”

Who made the first RV?

While people had been building custom RVs for over 30 years, companies began to manufacture these new types of vehicles. In 1936, the Curtis Aerocar was made by Glen Curtis, who was actually an aircraft designer, not an auto designer. That same year an RV called the Clipper was manufactured by Airstream Trailer Co; it could sleep 4 people and carry a supply of water. Within the next couple of years the “Teardrop” RV model became popular as well.

Around the same time, an Italian author, Gatti, had two RVs called “Jungle Yachts” made for his trip to Africa. These RVs had much more advanced designs and features than the RVs that came before them, including a dining car, a bar, two bedrooms, electrical lighting, and even a telephone. He and his company also built a 50ft Fifth Wheel RV that included an observation deck, a wine cellar, and many modern conveniences, making RV history! 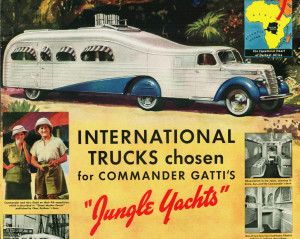 Who Modernized the RV?

After Gatti’s massive RVs were made, RV expansion basically halted as it was now the 1940s, and it was war time, so trailers were needed for other uses during both World War I and World War II. The US military even purchased thousands of RVs called “Palace Expanados” to house newly enlisted men and their families. However, after the war was over, the “RV Craze” began again.

Howard Hughes, the movie producer, actually had 8 large RVs built that served as mobile dressing rooms, which began the modern idea to commercialize RVs. For the first time an RV was made for something other than camping or exploring, introducing the idea of using RVs for business and other commercial purposes. 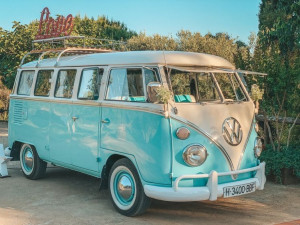 Once the 1950s hit, after Chevy manufactured a motorhome, RVs of all types just got better and better. Travel Trailers, Fifth Wheels, and Motorhomes all got bigger, longer, more spacious, and more luxurious. Soon manufacturers began equipping RVs with TVs and even crazier things such as portable swimming pools and diving boards!

As the RV Industry grew, many automobile companies tried their hand at RV manufacturing including Volkswagen and Dodge. The goal was to make RV living as convenient and comfortable as possible. It’s safe to say that the major RV brands today, like Grand Design, Keystone, and Forest River, have done an incredible job at doing just that. There are even people who live completely out of their RV; this has been deemed the “RV Lifestyle.”

RVs of the Future

While we know that the RV came from humble beginnings and has grown exponentially, the question remains, “what’s in store for the future of RVs?” Well, our guess is as good as yours, but if we had to predict the future, we’d say it definitely involves fully electric RVs.

In 2019, the world’s first fully electric RV, the Iridium EV, debuted at the Dusseldorf Caravan Salon, an RV trade show in Germany. This electric RV is the creation of two German companies, ElektroFahrzeuge Stuttgart, an electric vehicle retrofitter, and WOF, a camper van manufacturer. Even though this model is promising and has a great range per charge, many other companies are looking to beat this model. Since then, other electric RVs have begun to pop up in the RV industry. In this day and age, if the RV world is anything like the auto industry, we fully expect the “RV Craze” to find it’s next focus in electric recreational vehicles.